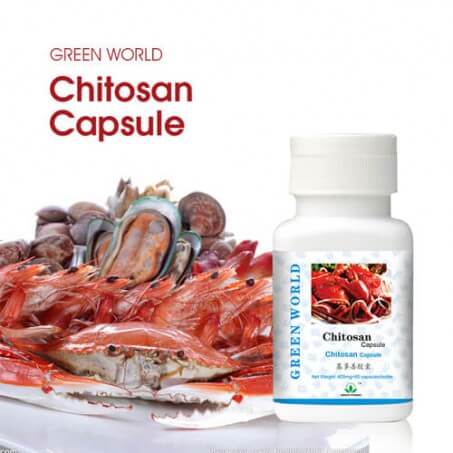 Green World Chitosan Capsule is called "the sixth element of life. Green World Chitosan is an Herbal Formula that effectively supports the slimming diet and now available in Pakistan...Chitosan was named “immunity guard”, “the best functional health food in the 21st century”. Green World chitosan consists of a very high - 85% degree of chitin deacetylation. The higher the deacetylation degree of this organic compound, the stronger the biochemical activity of the obtained chitosan. Hence, the formula is remarkably effective. The benefits of chitosan are great. Weight loss is one of the most recognized benefits of this starch. Due to amazingly results Green World Chitosan is a very popular product in Pakistan and all over the World. Now Chitosan is available in Pakistan.

Chitosan is made by the principles of Traditional Chinese Medicine (TCM). Chitosan is typically used as a natural seed treatment and plant growth enhancer, and as an ecologically friendly biopesticide substance that boosts the innate ability of plants to defend themselves against fungal infections. In many International Symposiums, chitosan was named “immunity guard”, “the best functional health food in the 21st century” The natural biocontrol active ingredients, chitin/chitosan, are found in the shells of crustaceans, such as lobster, crabs, and shrimp, and many other organisms, including insects and fungi Chitosan increases photosynthesis, promotes and enhances plant growth, stimulates nutrient uptake, increases germination and sprouting, and boosts plant vigor.

The electrical charges that chitosan carries may bind the negative charges on bile acids and fatty acids, resulting in the hypocholesterolemic (cholesterol-lowering) effect. Chitosan can bind up to six times its weight in fat. Chitosan does not work by making you feel less hungry. It works by actually helping fat pass through your body instead of storing it in the fat cells. Chitosan capsule helps people to lose weight easily and absorbs nutrients effectively which distinguishes itself from other weight-losing products that restrain appetite or lead to diarrhea