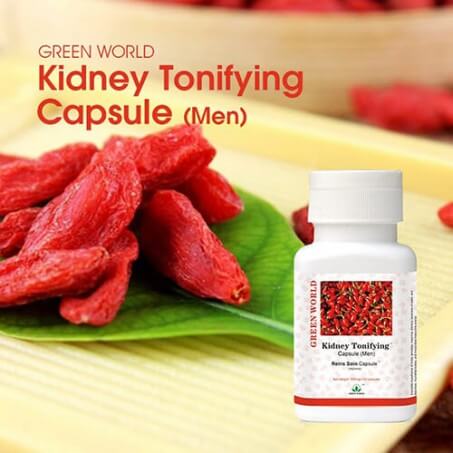 Brief: it Restores And Enhances The Detoxification And Other Functions Of The Kidney.
Size: 500 Mg X 100 Capsule Kidney Tonifying For Men

Green World Kidney Tonifying Capsule For Men in Pakistan. The kidneys are considered to be the most important source of energy in the body; therefore it is called the minister of power. The original prenatal energy (Yuan I) which forms the basis of life is stored in the kidney, which is why the kidneys are also known as the “Root of Life. With natural herbal extracts as its ingredients, Green World Kidney Notifying Capsule (Men) is ideal for alleviating “kidney fatigue” and improving general health condition in men.”, According to Chinese History, the Kidney Notifying Capsule (Men) also includes the adrenal glands that secrete a wide range of essential hormones regulating metabolism, excretion, immunity, sexual potency, and fertility. Thus the kidney controls sexual and reproductive functions and provides the body’s prime source of sexual vitality, which the Chines regard as a major indicator of health and immunity. The Kidney Notifying Capsule (Men) is extended to what the Chinese call the “external Kidney”; the testicles in men and the ovaries in women.

90% of these problems can be explained by “kidney fatigue”, a condition where kidneys’ function getting stagnated...Kidney meridian at the viewpoint of TCM (Traditional Chinese Medicine) Kidneys are known as the “Minister of Power”, they are regarded as the body’s most important reservoir of essential energy It is not unusual that men start having leg and lumbar pain, insomnia, forgetfulness, listlessness, lowered libido or sexual dysfunction due to the fast rhythm of modern life. The Kidney meridian is extended to what the Chinese call the “external Kidney”; the testicles in men and the ovaries in women.

Cash On Delivery All Over in Pakistan